Looks Like a Good Day to Swim, or Is It?

We often get calls every summer from people wondering if it’s safe to swim at one particular beach or another. It can be a tricky question, since  water quality testing is  not universal. What you may think is a public beach might not be considered to be “public” by local public health authorities interpreting provincial guidelines.  Plus, current water testing techniques take water samples, test them in the lab, and produce results usually 24 hours after taking the sample. Conditions can change quickly in 24 hours, so a good test result taken on a Friday doesn’t necessarily mean that swimming on a Saturday is in the same quality of water. A rainfall or increase in wave activity can alter water quality results quickly.

So there are several tools you can use to better inform yourself about the best places to go for a swim.  A relatively new way in Ontario  is to locate a “Blue Flag” beach. Many beaches on Lake Huron have what is referred to as a Blue Flag designation. This is an international program intended to identify beaches that have met a certain set of water quality, environmental, and safety criteria. Going to one of these beaches can at least assure you that a certain standard is being met, and that there is some third-party oversight in how the beach is being managed.

Another way is to use the SwimGuide app for Smartphones. This is a resource that uses water quality data from public health authorities around the Great Lakes. Again, test results are only as good as the  conditions under which the samples were taken.

Public Health Units also post swimming guidelines on their websites. We have linked to the relevant Lake Huron health units on our website here. Each unit determines where it does water testing, so never assume a beach is being tested just because there are a lot of people using it. And while water test results may be out of date before you step in the water, they are useful when the data are taken over a longer time period (several days or weeks) if they show a trend, whether it be good or bad. Some agencies in the US have been working on models to help speed up the process of providing beach quality information to the public by synthesizing testing data with lake conditions.

While apps and flags and test data can help you on your way to determining a safe choice, an additional method to help you verify a good swimming site is to observe conditions. If it has rained in your area within the last couple of days, chances are that bacteria levels will be higher. This is particularly true in places where agriculture is a predominant land use. Wavy conditions should also tell you that lake bottom and beach sediments, which can harbour pathogens like E. coli.,  have been stirred up and re-suspended in the water. Rule of thumb: If you can wade in up to your waist and still see your feet, it should be OK to swim. 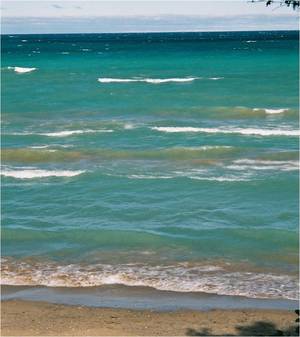 There are numerous agencies and organizations in the Lake Huron region working to improve water quality in the Lake Huron watershed. It’s a long and ongoing process. While progress is being made, some people still don’t get it. Whether it’s leaving dog feces on the beach, or ignoring a malfunctioning septic system, there is still much work to do in linking personal responsibility with lake quality. So while people want assurance of water safety, good, consistent water quality on Lake Huron will take time and cooperation.

So, if you're a beach goer looking for a good place to swim, using some good judgement, and the above tools, you can make an informed choice for you and your family. And one day, with everyone’s help, Lake Huron’s waters will be, without question, the best and cleanest in Ontario.

My Beach is Still Missing, Dude

As a sequel to the original “Dude, Where’s My Beach” article from last year, this article provides an update to lake level conditions.

Last year, we explained that the lack of walkable beaches was due to rapidly rising lake levels, converging with vegetation growth that had aided the build-up of dunes and beach sand over the preceding 14 years of below-average lake levels. We forecast then that fall storms and wave erosion would help readjust beaches, barring any further increases in lake levels. Well, as it happened, levels continued to increase, and beaches remained narrow this summer. In fact, a doubling of June’s average precipitation over the region caused Lake Huron’s levels to increase in July and into August, when typically early July is the start of the decline in the annual cycle.

Levels are over 30 centimetres above what they were at this time last year.  And where levels typically begin to decline over summer months, their continued rise means narrow beaches continue to narrow. Where levels will go from here is anyone’s guess, but beaches will continue to adjust as waves erode the shore and move sand around. The dune erosion that occurs provides sand to the beach and nearshore lakebed, and this helps to lessen the wave energy that erodes the shore. The build-up of sand in the dunes that occurred over the past 14 years is providing the shore protection we need now.

So, dude, how wide your beach is next summer will depend on what happens during the storm season this fall, and whether water levels continue to climb.  Levels will climb if we continue to receive high amounts of precipitation, and lower evaporation if lake water remains cool and we get another cold, icy winter.

Lake Michigan-Huron, (these 2 lakes behave as one big lake hydrologically), saw a rise in water levels from the record-low experienced in January 2013 through December 2014. It was a remarkable one metre increase that almost tied the record rise set in 1950-1951.

As we reach the first of August, some might lament that the summer is half over. But we say “we’ve got half the summer left!” That’s the kind of positivity the Centre uses to approach its conservation work. How can you go wrong donating to an organization  that works on hope and optimism, founded on science and informed stewardship?

A donation to the Coastal Centre is a positive, life-affirming act of greatness. 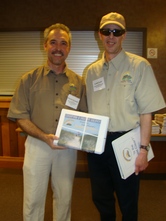